Zacchaeus, the Grumblers and LGBTQ People Of all the Gospel passages that I have found helpful in ministry with LGBTQ people, today’s reading—the beautiful story of Zacchaeus—has been the most meaningful for me (Lk 19: 1-10).

At first glance, the story of Jesus’s encounter with the tax collector in Jericho would seem to have little to do with LGBTQ people today. But if you read it carefully, this passage from Luke’s Gospel, a masterpiece of storytelling, has a great deal to say about all those who find themselves marginalized.

Now I don’t want to imply that LGBTQ people are always and everywhere “marginalized.” But it’s fair to say that in the Catholic Church many of them feel that way. So as we read the Gospel, I would like to invite you to see Zacchaeus as an emblem of the LGBTQ person. Notice all the subtle resonances in the story.

To begin with, Luke tells us that Zacchaeus is the “chief tax collector” in Jericho. Now, that would have meant that he was probably “on the outs” with most of the people in this predominantly Jewish town, not only because he was colluding with the Roman authorities, but also because tax collectors had the reputation of skimming money off the top. By the way, I’m not saying LGBTQ people are any more sinful than anyone else–we’re all sinners in one way or another. Rather, they often feel “on the outs,” especially in the church. Like Zacchaeus probably did in Jericho.

Zacchaeus is described as “short in stature.” Luke means that he was physically small. But how little “stature” do LGBTQ people have in the church today? And, says Luke, Zacchaeus couldn’t see Jesus “because of the crowd.” Again, that means that he couldn’t see over their heads, but how often does “the crowd” get in the way of LGBTQ people encountering God? How often are we part of “the crowd”? How often is the church part of “the crowd”?

So what does Zacchaeus do? He climbs a sycamore tree. (The homey touch of identifying the type of tree gives this story an added sense of historicity.) Why does he climb a tree? Because he wanted to “see Jesus.” (The original Greek is even more moving: he wanted “to see who Jesus was.”) That’s what LGBTQ Catholics want as well: to “see Jesus.” But the crowd gets in the way. So they must do something extra—go out on a limb—to see what everyone else sees.

As Jesus is passing through Jericho (this would probably have been with a sizeable crowd, since this story comes towards the end of his public ministry) he spies the diminutive tax collector perched in the sycamore tree. Jesus then invites himself to the man’s house, a public sign of welcome. “Zacchaeus,” says Jesus, “come down quickly, for today I must stay at your house!” Jesus is offering him what New Testament scholars call “table fellowship.”

Then comes my favorite line in the story: “When they all saw this, they began to grumble.” The Greek word used here is panta, all, which would have included the disciples as well. All began to grumble. Why? Because showing mercy to those on the margins always infuriates some people. It did in Jesus’s time and it does in ours.

So the next time you see someone opposing mercy to LGBTQ people, remember this line: “They began to grumble.”

But that does not deter Zacchaeus. He shinnies down the tree and “stands there” (the Greek word used has the implication of “standing one’s ground”). And he receives Jesus “with joy.” Of course! How joyful it is to be welcomed into the community! Many LGBTQ people know the joy of finally feeling welcomed.

Then Zacchaeus makes a public declaration: If he has defrauded anyone, he will repay them four times over and he will give half his money to the poor. This is usually considered to be Zacchaeus’s conversion, from whatever sins he had committed. And indeed, in the Gospels, any encounter with Jesus provokes a conversion. (By the way, I’m not alluding to “conversion therapy,” but to metanoia, the word Jesus used for the change of mind and heart that we are all called to.)

In other words, the conversion that is occurring may be not only Zacchaeus’s conversion, but the crowd’s conversion as well, as Jesus reveals to them that the one who was on the “outside” is more generous than they had imagined. How often is that the case with LGBTQ people, after people in the church come to know them!

At the end of the story, Jesus calls Zacchaeus a “Son of Abraham.” It’s a phrase that would have resonated with the Jewish crowd. Later in Luke, Jesus calls the woman who was “bent over” the “Daughter of Abraham” after he has healed her (13:16). In both cases, Jesus is reminding the crowd that “they” are part of “us.”

In today’s Gospel, Jesus has demonstrated his inclusion of Zacchaeus not only by inviting himself to dine at his house, but by using the phrase “Son of Abraham,” which tells the crowd explicitly, “This man is one of us.”

This meditation is from Outreach’s Sunday Gospel reflection and newsletter. If you’d like to receive a reflection every week (for free) just sign up here. Jean-Marie Navetta / September 30, 2022
Outreach is part of America Media. To support Outreach you can make a donation or subscribe to America. 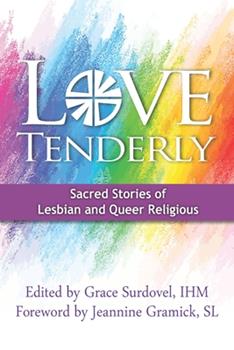 Love Tenderly is a collection of personal stories shared by women religious who identify as lesbian or queer, and who have come to embrace their sexual orientation as an integral part of their identity and vocation to religious life.