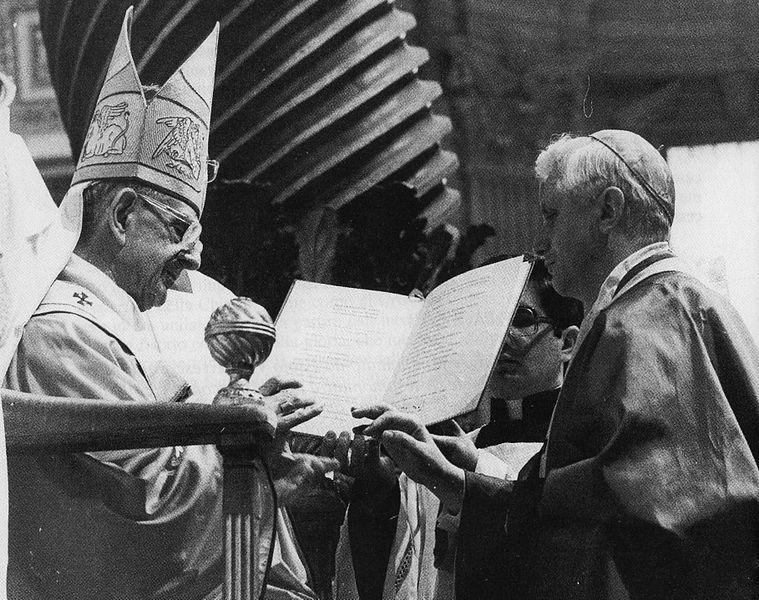 The recent death of Pope Benedict XVI caused me to remember an encounter I had with him in New York City, when he was still Cardinal Joseph Ratzinger. In 1988, I was in the audience of St. Peter’s Church, a Lutheran congregation in Midtown Manhattan, where Cardinal Ratzinger was giving a talk and taking some questions. I asked him a question that I believe is as valid today as it was when I posed it many years ago.

Some context might be helpful: I am a gay Catholic born during the pontificate of Pope Pius XII. After graduating from law school at the outset of the H.I.V./AIDS crisis, I moved from the Brooklyn parish of my birth to the Manhattan parish of St. Paul the Apostle.

As an LGBTQ activist, I was also involved in a range of civil rights and social justice issues. In time, I became active in a number of parish ministries while also knowing the value of being an openly gay man. While my LGBTQ Catholic ministry was in its nascent phase, Cardinal Ratzinger issued his 1986 “Halloween” letter, which declared that the homosexual “inclination” was ”objectively disordered” and a tendency towards “evil.”

In the aftermath of this letter, and with organizations like Dignity forced off church property as a result, I formalized the parish-based “Gay & Lesbian Catholic Ministry of St. Paul the Apostle.” It was the first known gay ministry (that is, one using that name) in a Catholic parish in New York City.

The question that I posed to Cardinal Ratzinger was this: “If we say at every Mass, ‘Look not upon our sins, but on the faith of your church,’ then why do we constantly focus on the sin of the homosexual?”

I would like to tell you he responded to my question, but he just sat there and remained silent. After an uncomfortable period of silence, no further questions were permitted.

While Cardinal Ratzinger did not answer, another person in the audience confronted me on my way out. He was visibly agitated. “We will focus on your faith, but only after your contrition and penance for your sins!” he said.

Clearly, the more traditional side of the church mourns the death of Pope Benedict XVI. They loved him and his strong defense of church teaching. The left—perhaps not so much. Regrettably, many show disdain and even profess hatred for the former pope, still calling him “God’s Rottweiler,” a nickname from his time as prefect of the Congregation for the Doctrine of the Faith.

I am not looking to change anyone’s feelings about the late pontiff, but I ask you to consider that just as the right and left wings are part of the same bird, so too, are the right and left sides of our church part of the same Body of Christ. There is much common and holy ground between us all. I would also like to address LGBTQ people and others who may harbor strong feelings against Pope Benedict, and feel they cannot forgive or pray for him.

Joy is a choice, and seeing the goodness in ourselves and others is also a choice. So, I ask you to consider some of the goodness of the late Pope Benedict. To being with, he met with clergy sexual abuse victims, and he is lauded for his persistent efforts to bring peace and justice to Northern Ireland. He was a prolific writer and educator who authored a series of books on Jesus, as well as a number of encyclicals, including one of my favorites, “Deus Caritas Est.”

The encyclical deals with the most fundamental calling of every Christian: love. But perhaps his greatest goodness was stepping aside and resigning his pontificate, a great act of humility.

While Cardinal Ratzinger responded to my question with silence many years ago, I urge people not to stay silent today. Put your faith into action. For those on the left, when you say during the Mass, “Look not upon our sins, but on the faith of your church,” I invite you not to focus on any perceived sins of Pope Benedict, but on his faith and service to our church. Say a prayer for him, consider forgiving him and strive to see his goodness.

For those on the right, I offer a similar opportunity: Focus not on any sins of LGBTQ people, but on our faith. Say a prayer for Pope Francis and look to see his goodness, too. Then let all of us, individually and collectively, strive to better live the Gospel message of Jesus Christ and bring it to a world a need.

I invite you to join me in this prayer:

O Lord, grant eternal rest unto Benedict, who was once our pope. Thank you for your service and for keeping the faith. You fought the good fight; you have finished the race. Now, let perpetual light shine upon you, and may you rest in peace. Amen Donald Maher is an attorney, writer, activist, yoga teacher and a parishioner at St. Margaret’s Roman Catholic Church in Reading, Pa. He conducts LGBTQ Catholic ministry in the Diocese of Allentown.

All articles by Donald Maher