Why queer joy is vital to the church Views Brody McCurdy / August 6, 2022 Print this:
A still from the 1973 film adaption of "Godspell," which originally premiered off-Broadway in 1971. (Photo courtesy of IMDb) © Columbia Pictures

I am a huge fan of showtunes. In fact, I often joke that if I were ever to write an autobiography, I would title each section after musicals I was obsessed with during various parts of my life. The chapter covering my junior year of college would no doubt be titled “The Year of the Jesus Musical” because, during that year, you could find me listening to the soundtracks of “Godspell” and “Jesus Christ Superstar” at any time.

However, it was the 1973 film adaptation of “Godspell”—the zany, musical retelling of the Gospel of Matthew—that held particular importance for me during that time, when I had started to grow increasingly disillusioned with the church and was coming to terms with my own identity as a gay Catholic. When traditional religious rites and language faltered, and when Catholic spaces ceased to make me feel welcome, the musical’s soundtrack helped me cling to a faith I felt was quickly slipping from my grasp.

I think one of the reasons I appreciate this film is that it has forced me to reckon with the centrality of joy in the Gospel narratives. The movie’s over-the-top clown attire, kitschy choreography and campy soundtrack unapologetically proclaimed a gospel of joy and celebration at a time when my experience as a queer person of faith had become defined by pessimism and exasperation. In the face of my cynicism, “Godspell” invited me to “come sing about love,” to quote one of its songs, and to re-embrace joy.

Finding joy as a queer Catholic is not a simple task. While signs of hope in the church abound as Pope Francis and others express an openness to LGBTQ Catholics, the continued marginalization of our community is just as pervasive. Catholicism is, after all, a faith which embraces the “both/and,” as many queer Catholics find ourselves caught in the uneasy tensions between the reality of now and the hope of the ever shall be.

What’s more, LGBTQ Catholics are often only provided a platform to voice our trauma. Loneliness, isolation, despair, rejection—these phenomena are so interwoven into the queer experience that to ignore them would be neglectful. But to focus solely on this aspect of queer Christian identity is to ignore the joy to which the queer faithful bear witness everyday, a joy which intimately knows the ugliness of humanity and yet proclaims the goodness—the fabulousness—of creation.

After all, gaiety is embedded in the very language with which many in the community identify ourselves. It seems only fitting, then, to understand what Catholic, queer people of faith can teach the broader Church about joy in Christian life.

This queer joy was something I was first able to articulate after watching “Godspell.” In the beginning of the film, John the Baptist blows a shofar from atop a fountain in Central Park as he sings out his proclamation: “Prepare ye the way of the Lord!” Amid the bustling of the city, and caught in the life-sucking monotony of their daily routines, a handful of individuals hear the call and joyfully drop everything to dance and follow him.

What I love about this scene is that it vividly captures the joyous disruption brought about by an encounter. For a moment, these individuals, perhaps for the first time in their lives, are able to envision a future so radically different from the ones they had envisioned for themselves. It is what I imagine Peter, a career fisherman, felt on the banks of the Sea of Galilee in the seconds after Jesus called on the apostle to drop his nets and follow him.

And it is what I felt the moment I first allowed myself to dream of a life beyond the narrow vocational pathways prescribed to LGBTQ people by the Church.

Time after time, we see this same pattern across the Gospels. Whether in healings or in sermons, an encounter with Christ enables people to envision a world so different from the one they had previously known.

This is the unique power of queer joy. It not only describes the joy which queer people of faith possess, but also the transformative means through which, like John the Baptist in “Godspell” and Jesus in his ministry, queer life so joyfully disrupts our conventional notions of love and family. It frees us to reimagine the kingdom of God, to fully imagine the vocational possibilities of platonic, romantic, celibate and married life. It allows us to liberate God’s image from the limited social categories which we impose on it and to unbound the notion of family from a solely biological phenomenon to one which can be found, created and cultivated.

This is why I think the term “queer” is so powerful. While for many in the LGBTQ community, this term still holds too much stigma, I believe it is precisely the word’s connotation as “strange” which places it at the heart of the church’s prophetic ministry: To joyfully proclaim the good news of a world that is so different (or queer) to the one we know now.

We see this displayed so beautifully in Mary’s Magnificat, which is “queer” in the sense that the world it describes is entirely countercultural to the world we live in today. The rich are still rich and continue to accumulate wealth at the expense of the poor. The mighty continue to hold power while those with whom they are entrusted are left hungry and empty-handed. Yet despite these past and current realities, Mary is still able to joyfully and confidently sing to Elizabeth—and the generations which followed—about a world in which the opposite is not only a future possibility, but an already-present reality.

Mary’s joy here is queer joy—a willingness to dream and proclaim in the face of adversity—and her prayer demonstrates this joy’s prophetic and transformative force. Contrary to many of the criticisms levied against the LGBTQ community, this joy is also fundamentally procreative, as it embodies the kingdom of God and conceives its infinite possibilities. Far from being the sole concern of the few, queer joy is an indispensable tool for a church in desperate need of hopeful reimagining and renewal.

As we continue along our synodal journey, I pray we take this time to listen to our queer siblings in and outside the Church. May this encounter transform us and give us the courage to work towards building a more just, more Christ-like community. So, just like the disciples in “Godspell,” when we hear the call of the Holy Spirit, we can drop everything—our preconceived notions, our theological certainties, all those things which prevent us from re-envisioning a better world—and join joyfully in the dance. Brody McCurdy is a linguist and researcher at North Carolina State University in Raleigh.

All articles by Brody McCurdy 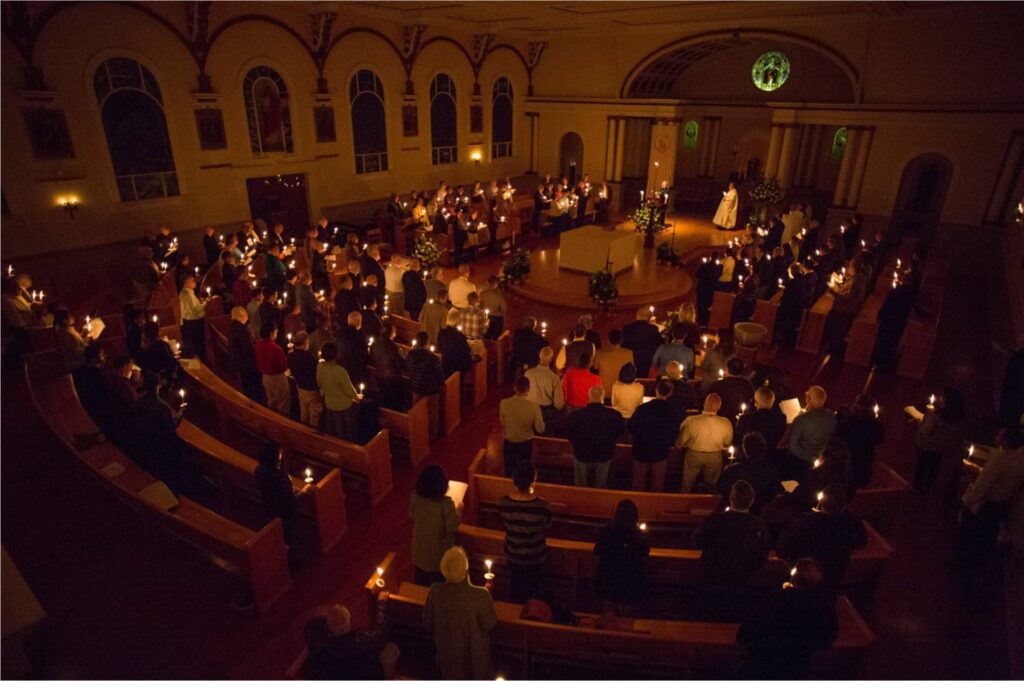